If there was no Israel, no Jews, no Christians, nor any other infidels, the internal struggle within Islam would still threaten the world. When Muhammad died a huge rift appeared in Islam because Muslims could not agree who will take over. This bitter struggle between Sunni and Shia Muslims is greater than the hate that both sides have towards the rest of the world 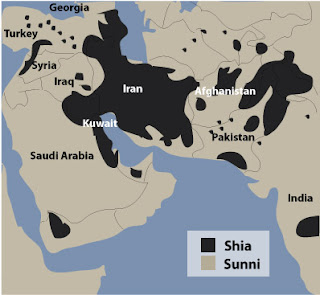 When Iran develops the atomic bomb and a means to deliver it, its first target might be Israel but neighboring Arab States will also be in its cross hairs. Source is Agora Financial 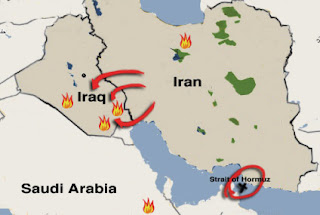 With total control of the Hormuz "oil chokepoint" in the Persian Gulf
and new power in "liberated" Iraq, the Iranians have a brand new foothold
for kicking off the long-awaited "Shia Revolution."
Source is Agora Financial

By blocking the Straits of Hormuz causing a worldwide oil shortage, oil prices will surge above $250/barrel. Gas and other products derived from petroleum, prices will soar. Even though most of America’s oil does not come from the Middle East, our economy will suffer along with the rest of the world.

We must be oil self-reliant by the time this happens. Even if the Middle East erupts before we start pumping, we can stave off much of the effect if we start exploiting our own oil reserves NOW!

Even if the rest of the world unites to defeat Iran, the damage will be done. All countries will have to depend on oil from Russia, Venezuela, and other countries trying to dominate world economies. We have more than enough reserves to see us through this calamity. We need to press Congress and state legislators start drilling NOW!
Posted by Vladimir Val at 11:31 AM No comments:

We need to use whatever sources of energy are now available

There is nothing stopping private industry to invest in alternative energy, except profitability and the vast amount of horrendous regulations, studies, and fees standing in the way. A solar energy generation plant in the California Desert was abandoned due to the high cost and time involved in getting permits to build it. A wind farm plan was abandoned when environmentalists objected on the grounds that birds might fly into them. These and other objections are standing in the way of alternative energy sources. The only companies who will be able to avoid them are those which hold favor with the government. This shows the true purpose of these stumbling blocks to California business. Their main goal is for government to have more and more control of the people.

It is against the law to manufacture solar panels in California. They are being built in India and other foreign countries which benefit leaving Americans on the side line. The motors for the wind energy generating farms are built overseas, again leaving American business out of the loop.

There have been no new refineries built in California for decades, environmentalists oppose hydroelectric plants, and even though natural leaking of oil is polluting Santa Barbara beaches and others, we can’t relieve the pressure by harvesting the oil. The cleanest source of energy is nuclear. Plants have and are being built all over the world because they are safer than ever but there are no plans for any new ones in California.

We need to use whatever sources of energy are now available while private industry searches for other economical ways. Government rules and regulations only stand in the way of our energy independence and economic recovery. Government is not the solution to problems. Government is the problem.
Posted by Vladimir Val at 5:45 PM No comments:

United Nations to push for a world tax

Recently CNSNews.com wrote “A group of 60 nations will meet next week at the United Nations to push for a tax on foreign currency transactions as a way to generate revenue to meet global poverty-reduction goals, including “climate change” mitigation. Spearheaded by European Union countries, the so-called “innovative financing” proposal envisages a tax of 0.005 percent (five cents per $1,000), which experts estimate could produce more than $30 billion a year worldwide for priority causes. 'link '

Maybe I missed it. When did Americans vote to be taken over by a World Government run by Europeans or anyone else? For many decades America has been doling out money and various other form of aid to other countries for various reasons. Now as good neighbors Americans have had no problem helping people who have suffered from natural calamities; floods, earthquakes, and such. But the world seems to think that it has a right to whatever America has.

America is and has been the most generous country in history. After being viciously attacked by both Germany and Japan, at the end of WWII Americans helped to restore the economy of both nations. The only land we asked for was to bury our dead. America has never “stolen” oil reserves form any nation. If one looks at history it was Great Briton and France who colonized the countries with oil. It was America that brought tremendous innovations to the world, especially in the 20th century; innovations that the whole world benefited from. “Global Poverty” is not America’s fault. It is mostly caused by the governments of those countries that keep its people poor by stealing most of their GDP for themselves.

It is no secret that most of the aid America has doled out to the world never gets to the people. A big example is the Middle East. Instead of improving the lives of the people they purport to represent all the aid that the PLO, PA, Hamas, and Hizbullah received from all over the world including America and Israel, these groups have used the money to build up armies against Israel, spew hate and terror, and also line their own pockets.

Jealous World Leaders have been picking the pockets of Americans for many decades. Now that we have a president who is a globalist and socialist who does not particularly hold our Constitution and way of life to high esteem, they see an opportunity to rip us off even more.

Counting those Americans that are looking for work, are forced to take part time jobs, work in positions not up to their potential, and all those who gave up looking and are now depleting their savings to live, more than 20% of the US work force is idle. America needs to stop doling out money to the rest of the world and provide incentives, such as huge tax breaks, to rejuvenate our economy. We also need to make it easier for businesses to exploit our natural resources. America has given much and owes nothing to the rest of the world. Any aid we provide is charity. Charity must begin at home else we won’t be in any position help ourselves or anyone.
Posted by Vladimir Val at 12:59 PM No comments:

Will Islam accept other cultures and beliefs?

Some have hope of a reformation in Islam. They believe that Islam will mature, embrace modern times and thinking, and will accept living with the rest of the world rather than trying to conquer it by any and all means. They disregard the deep rooted 7th century mentality of Islam. Islam’s mission is to convert or destroy all who reject it. That has not changed one iota for the past 1,400 years.

I and just about all who have studied the history and current events regarding Islam, all are convinced that a reformation within Islam will not happen in time to stave off a major conflict between it and the modern world. It is not a question of education or exposure to the west. Suicide attacks have been perpetrated by illiterate goat herders as well as professionals who were educated in the west. People living in the west, still hold on to the primitive edicts of Shariah Law. This is evident by the many “honor killings” in America and other western countries.
If built, the Mosque at ground zero will be a symbol of Islam’s victory and dominance. This is the pattern of Islam, destroying symbols of other cultures and religions and replacing them with a Mosque as was the Mosque (Cordova House) in Spain.
Posted by Vladimir Val at 10:19 AM No comments: